As they say, we mommies are our children’s first teachers. From the values that we want to instill in them to the knowledge that will be used in school, they always learn it first from us. And one of those first lessons is the basic of them all — the alphabet.

It may look simple but the sheer number of letters and difference in strokes are enough to confuse a child.

And that’s before we even get into phonics!

So, in this article, we compiled a list of games that can help you teach your child the alphabet. What better way to teach them than to have fun doing it! That’s especially true because we know firsthand how short their attention span is. 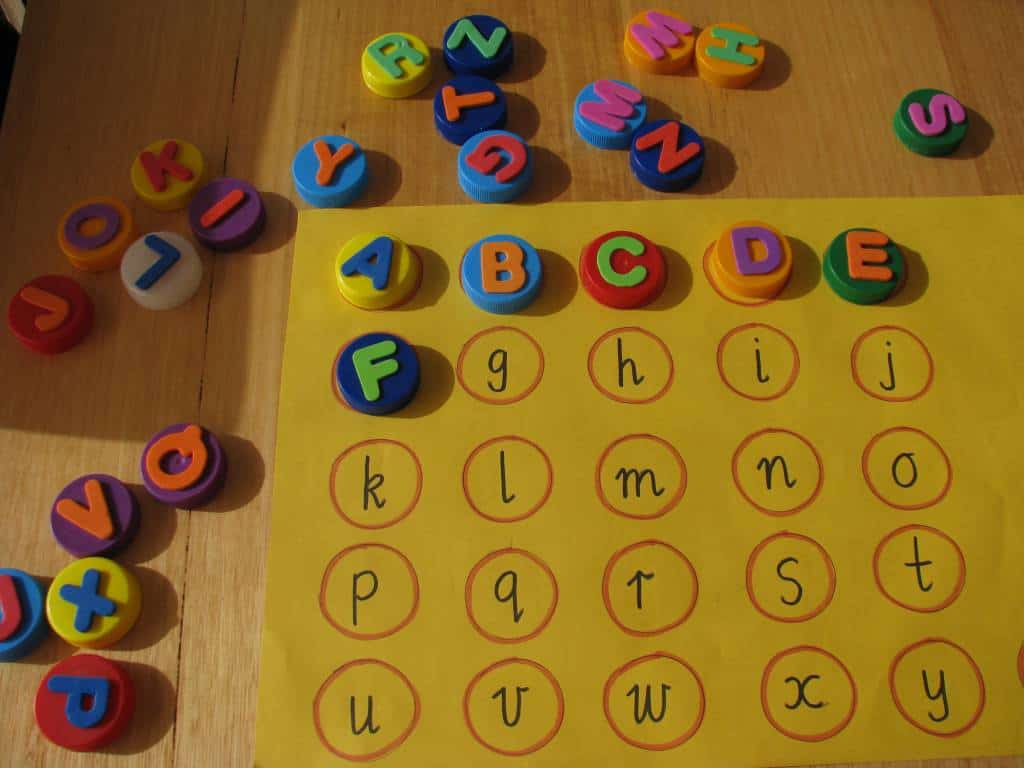 In this version of connect the dots, your child gets to play outdoors! Just draw a simple picture using our Jumbo sidewalk chalk and outline the shape with dots and letters. Ask them to connect the letters and have them guess what the picture is. You can even color it as our sidewalk chalk comes in 10 different colors.

What you need: Jumbo Sidewalk Chalks (yup! That’s it!)

It doesn’t have to be shark actually. It can be whatever animal your child is into. It can be a dinosaur, a crocodile, a zebra or a unicorn even. You just have to cut the animal’s head from a piece of cardboard.

Make sure you make a big hole for the mouth!

Prop it against a table so it will stand but still have some space behind it. Then cut smaller pieces of food for the animal you have chosen and write the letters on it. And voila, you are done! Let your child explore on his own or you can pretend that the animal is hungry and wants a specific letter. Your child will surely enjoy feeding his favorite animal!

What you need: Cardboard, markers, tape 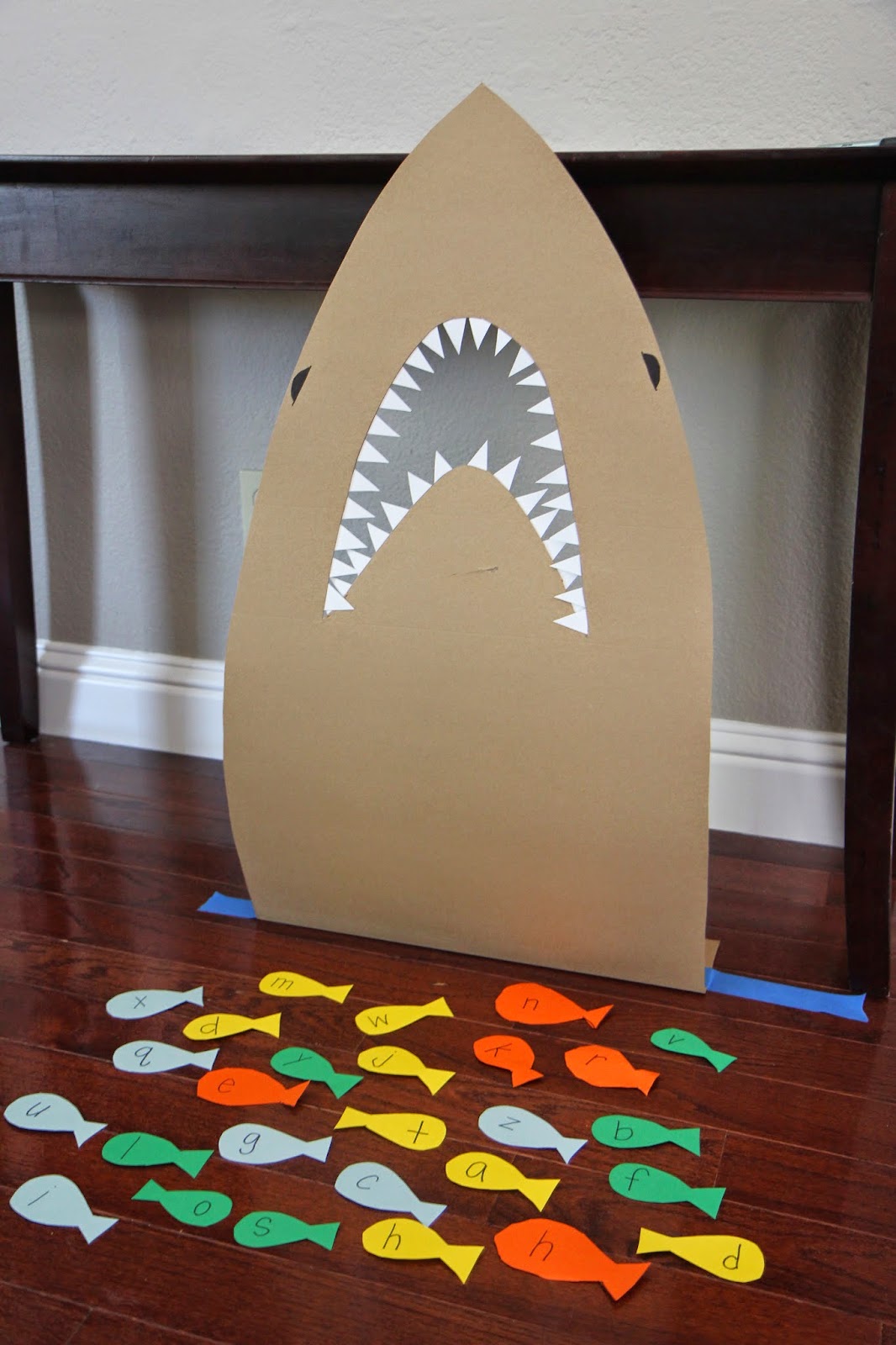 Jack and the Beanstalk Alphabet Game

This one is fun! Your kids will surely have a blast using his own picture as a game piece. Actually, he will be Jack (or you could make a Jill)! All you have to do is make a beanstalk using a green construction paper with leaves marked with letters you want your child to learn. Then, use a foam block/cube as a dice just mark it with the letters you wrote in the leaves. All players should place their pictures at the bottom of the beanstalk then take turns rolling the dice and moving their picture to the letter on the beanstalk. Whoever reaches the top of the beanstalk first wins!

What you need: green construction paper, tape, marker, picture of the kid/s who will play, foam block/cube 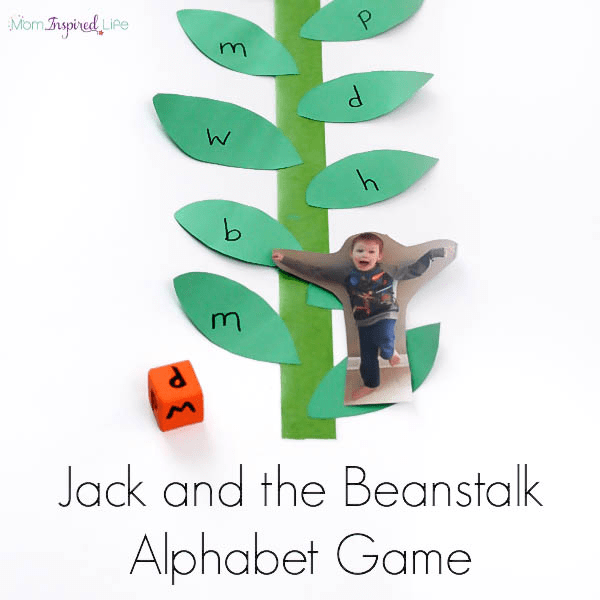 This game is like hitting two birds with one stone — your child gets to learn the alphabet and practice her motor skills too. Just draw the boxes the same way you do it for a regular hopscotch but write different letters inside them. As she hops from one box to the other, have her say the name of the letter. And that’s it, she’s done for her lessons and exercise in one go! 🙂

What you need: Sidewalk chalk 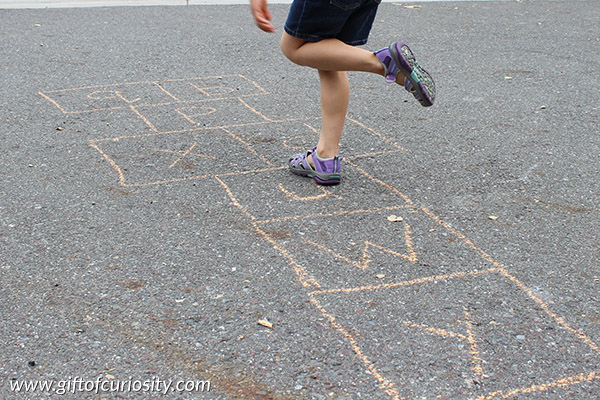 If your little one likes the outdoors, then this game is for him! You just have to put foam bath letters inside your kiddie pool (aren’t kiddie pools so versatile? :)) and cover them with corn meal or sand. Let them use a bug catcher to scoop out letters.

Ask them to shout out the letter they scooped out and give you words that begin with that letter. Kiddie pool, sand and the outdoors — who would have thought that you can learn while playing with those? 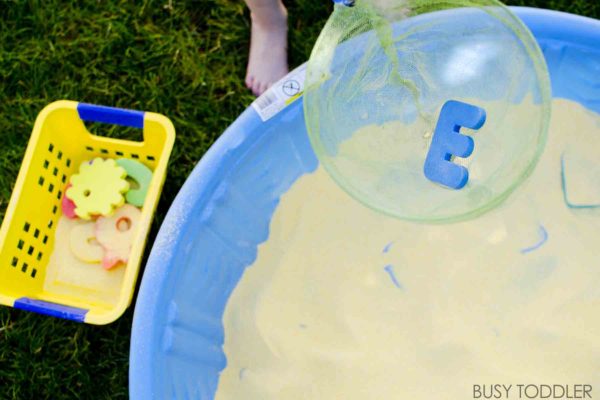 Now, who doesn’t love mazes? Every kid I know loves mazes!. They are challenging yet fun.
So, why not incorporate some learning into it to make it the perfect game! Just prepare a maze using a painter’s tape, write the alphabet on each turn, add in some wrong letters if he took a wrong turn and let him use his toy car to choose the right path. The objective of the game is for your child to memorize the alphabet in order.

What you need: painter’s tape, marker, toy car, sidewalk chalk (use chalk instead of tape if the weather’s nice and you want to play this outside) 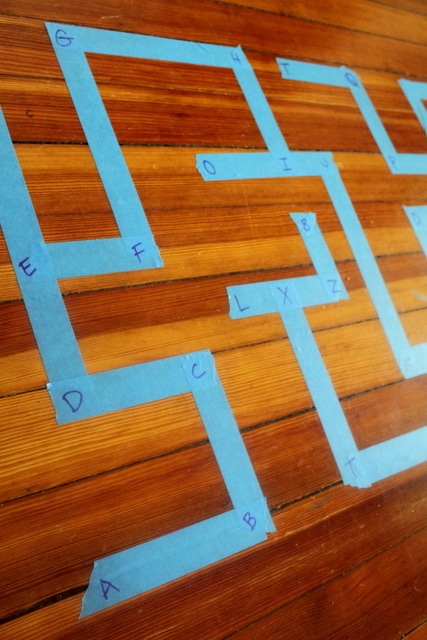 This cup hunt may be the easiest to do but still, entertaining enough to keep your child’s attention. Choose 5 letters you want to focus on and write them on the cups. Then, hide a small ball under one of the cups and ask your child to find the ball by saying the letter written on the cup she thinks is covering the ball. Simple and definitely fun too! 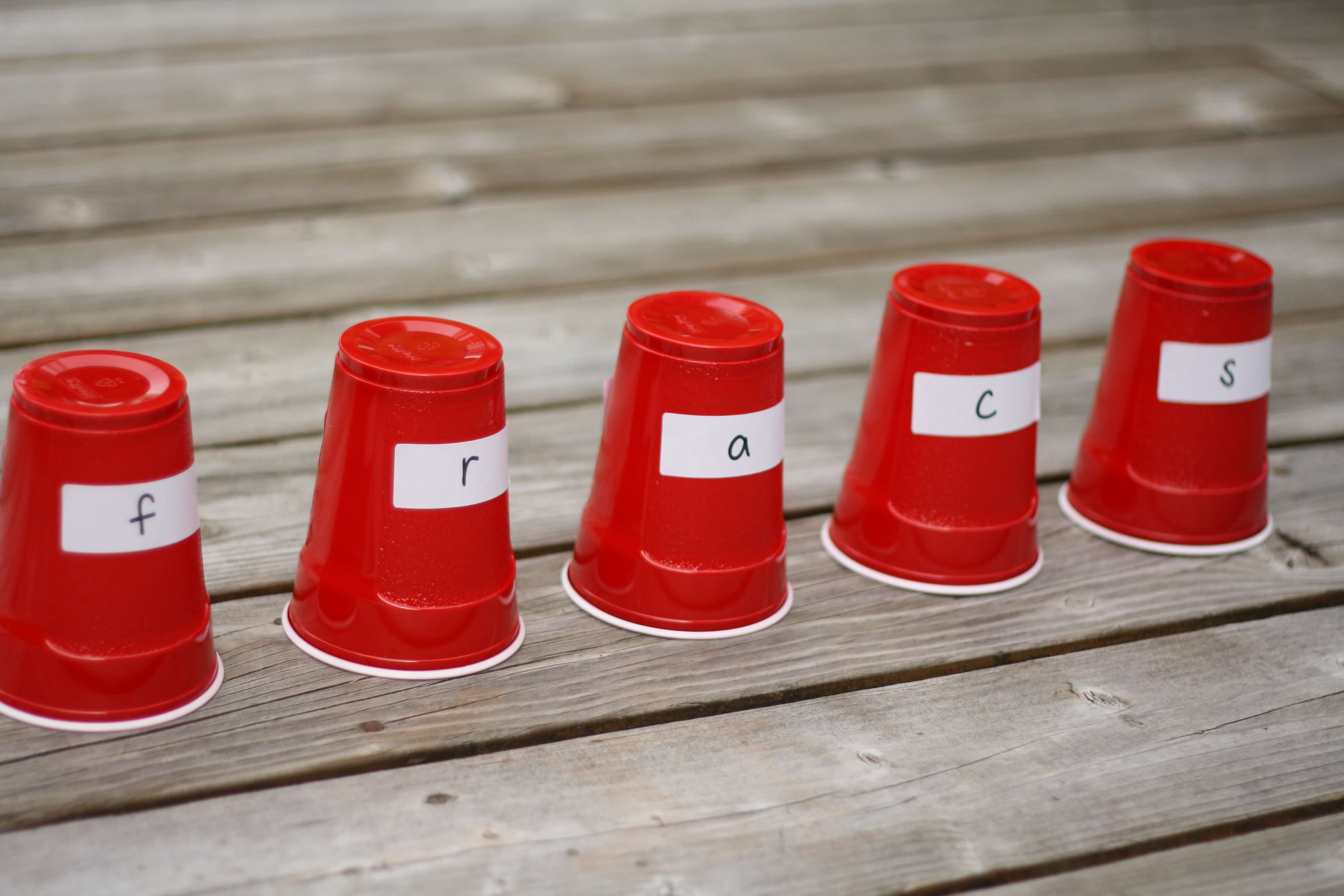 Scavenger hunts are always fun! In this version, you have to place 26 pieces of paper with a letter in them around the room or garden. The challenge is for your child to look for as many items that begin with each of the letters.

What you need: Paper, markers 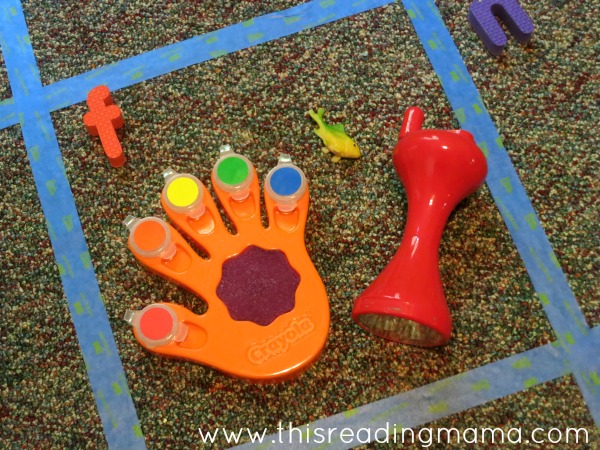 This memory game is very similar to how you remember it. But instead of trying to match the pictures of their favorite characters, they’ll try to match the uppercase letter with the lowercase letter or an item to its beginning letter. Time to sharpen those memories!

What you need: cardboard, markers

Like other board games, this one starts with players rolling the dice and moving their game piece accordingly. They have to say the letter and the sound it makes where their game piece landed. The first one to reach the finish line or the letter Z wins.

What you need: printout/alphabet board, dice, small object to be used as game piece 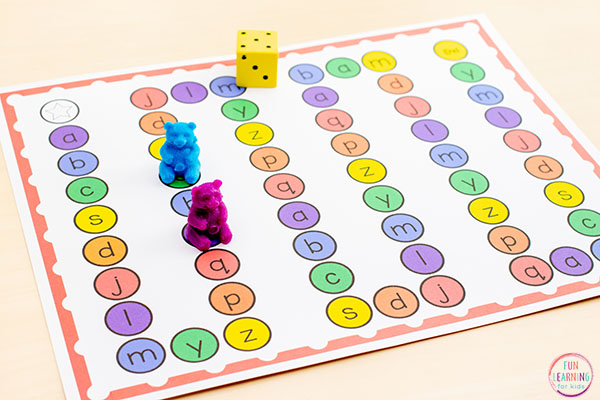 Now, this is one classic and simple game that’s best enjoyed with others. You simply have to place the cards on the floor, shout out a letter and the players bring them it to you the fastest. An added bonus is if they can remember an object starting with that letter as well.

What you need: flash cards, blocks with letters, or cardboard for the letters

While you’re playing, remember that each kid has his own pace of learning. If it’s not fun any more or too much pressure, take a break and come back to it later. Most importantly, let them enjoy the learning process with these fun games!

What are you looking for?